This page features samples of some of my compositions that have been recorded and performed frequently. I hope you enjoy them! I do have some scores for sale, please send me an email if interested.

PLEASE, anyone performing my music or planning a performance, I would enjoy knowing about it. Please send me a program, by email.

NEW: Three Artisans, for Flute and Guitar, will be premiered on January 27, 2019, by the Cavatina Duo in San Antonio. The concert is part of the San Antonio Chamber Music Society season. I composed this piece in the memory of my good friend Tal Perkes, who was Principal Flute of the San Antonio Symphony for many years, and passed away unexpectedly in October 2012. The piece has three movements, each inspired by an aspect of Tal’s life and passions: 1. The Painter  2. The Architect  3. The Flute Player

Here are videos of the piece, performed by the brilliant Cavatina Duo, who I wrote the piece for and collaborated with on some of the elements.

Many thanks to the San Antonio Chamber Music Society for commissioning this piece and presenting the premiere. 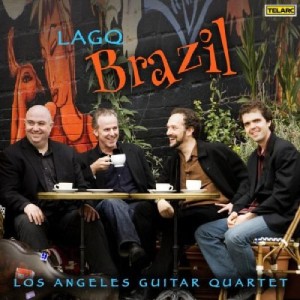 Appalachian Summer, composed for the GFA competition. Winner Jerome Ducharme performing at the competition. This score is available at GSP. Jerome also recorded this piece on his excellent Naxos CD Guitar Recital. 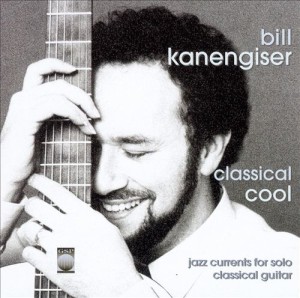 Live performance of Cuba Libre, with the LAGQ, at Skidmore University

Here are some sample scores for the miniatures. If you like them, please purchase the entire book/CD through GSP.

Here’s a quartet piece called Did you See the Moon Last Night? that was recorded and frequently performed by the LAGQ. This performance is by the UTSA guitar student quartet:

In the fall 2014, I had the pleasure of composing and recording an orchestral film score. The film is a 40 minute dialogue free western psychological drama. There are 37 minutes of composed music in the film; it literally tells the story. Here’s the trailer for the film: 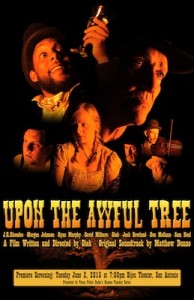 Update: The soundtrack has now been released as a CD, so I’ve moved most of the music samples to the recordings page. Here’s one to get you started.

In 2014 composed a piece for my good friends Mary Akerman and Bob Teixeira, who have an excellent guitar duo. Here’s a video of that piece, performed by my students Jeffery Dunn and Ashley Lucero:

This video and several others on my site were shot by my very talented former student Mark Bueno.

Here’s a photo of the cover for a new piece that I wrote for David Russell in 2016. It’s a three movement sonata called Landmarks. The piece was premiered by David in San Antonio on February 4, 2017, in a concert presented by Arts San Antonio. 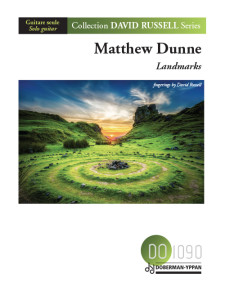 The piece is about 17 minutes in length and is published by Doberman publications. It’s available through their website. Here are my notes for the publication:

Landmarks, dedicated to David Russell, combines three musical traditions that I find particularly inspiring. The first movement, Camilliola, includes jazz-influenced harmonies and shifting rhythmic emphasis. The title is a reference to a long-running duo gig that I played in the late 1990s. The second movement, Cancion, was inspired by the beauty of Spanish songs, with some modal inflections and a hint of Bolero rhythm. The third movement, Reel Variations, begins with a tribute to the great traditional Scottish dance forms, and continues with variations that draw from a variety of music styles. I wanted to include some of David’s own musical “landmarks” in my inspiration, as I (and so many other guitarists) have been inspired throughout the years by his remarkable expressive ability.

The piece has been performed by David throughout the US on his 2017 tour, and has been very favorably reviewed:

For this listener, the high point of the evening arrived with American composer Matthew Dunne’s Landmarks, a work composed specially for Russell and premiered last month in San Antonio. Dunne gives us the best of several worlds here, with gentle influences from soft rock and jazz contained in a concise but fully-developed three-movement sonata structure—albeit with evocative titles for each movement. The opening “Camelliola” (named for the Club Camille where Dunne once played) moves with gentle momentum to an urgent development section, while the middle movement, “Cancion,” delivers a smooth, poetic longing. The final movement, “Reel Variations,” rises out of a theme suggesting traditional Scottish music to arrive at a brilliantly virtuosic toccata.

From the Fort Worth Star-Telegram

“Landmarks,” a three-movement work by San Antonio-based composer Matthew Dunne, was one of the real standouts in an excellent program of works by some of the greats of the classical guitar repertoire.

Dunne’s piece, which Russell just debuted in February, opened with “Camilliola,” a gentle and atmospheric movement with just a hint of modernism. The following “Cancion” was a near lullaby in the Spanish style that nicely lived up to its name. And utterly charming was the closing “Reel Variations.” Although he grew up on the Spanish island of Minorca, Russell is a native Scot. So Dunne composed the movement with Scottish dances in mind. It was a kilt-clad delight from start to finish, and put an exclamation point on its proud prancing with a fast and flashy ending. If Russell is looking for a signature work, Dunne has given him an excellent candidate with this 16-minute composition.

Here’s another video by my talented students of my quartet Cuba Libre. We had the opportunity to play a concert tour in Cuba in March 2017, and this piece was on our program. It was a big hit with Cuban audiences!

Here is a video of a two guitar piece I wrote a few years ago, the first in a series based on the styles of influential jazz pianists. This one is a tribute to the great Bill Evans, called Little Waltz. Performing the piece are two of my former students who play really well together, Ashley Lucero and Susana Frade.